Finding a healthy balance between employment and living opportunities can be difficult. Cities are often the best for finding jobs, in terms of the number of available opportunities, the level of pay and how reliable the internet is – which is proving to a necessity in the current climate. However, living in a city also comes with its own issues such as expensive rental costs and housing prices, particularly in the capital.

That’s why we’ve pulled together data in order to rank major cities to find out which city is the most attractive for employment. We ranked them by the following data points:

We’ll go into further analysis for the various data points below our overall ranking table and if you want to find all the data you can do so here.

So, without further ado let’s find out who ranks as our best city for the most attractive for employment.

The most attractive cities for employment

We added the results together to find the most attractive cities for employment. The final overall rankings can be seen below: 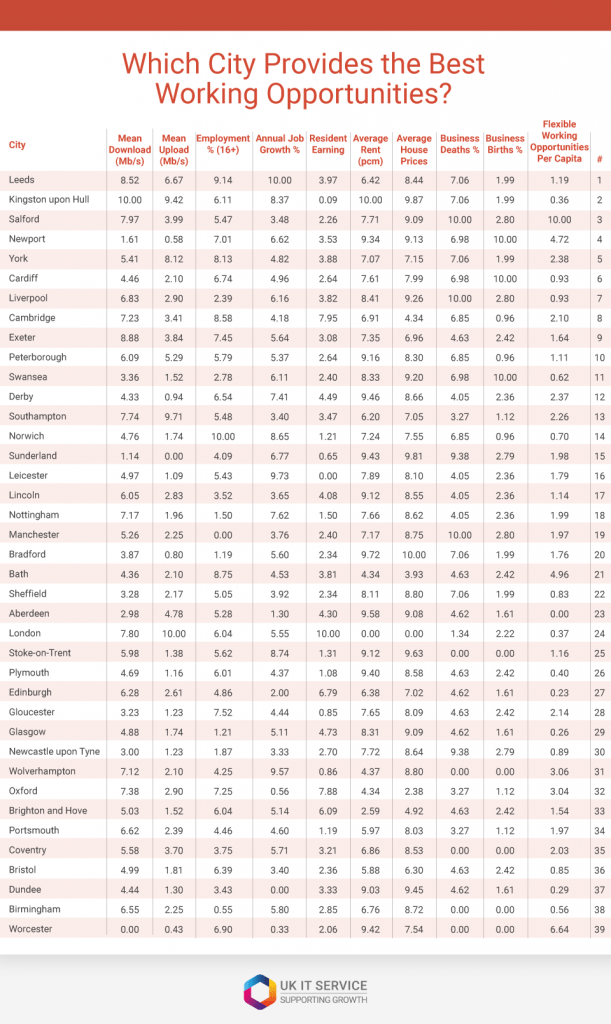 Tallying up all metrics to find the most attractive city to live and work we found Leeds was first. While having a low number of flexible job opportunities it has seen the largest job growth, the second-highest employment rate out of all the cities and ranked high in terms of internet speeds. Resident earnings are also fairly low but are offset to some degree by relatively cheap rental and cheap average house prices.

In second, we see Kingston upon Hull with the highest download speed and third-highest upload speeds. Resident earning is particularly low, however, it also has the cheapest rent and second-cheapest house prices among the cities explored.

In third is Salford which scored high due to its cheap rental prices, low number of business deaths and for having the highest number of flexible working availability.

On the opposite end of the spectrum, we see Worcester which has the lowest download speed, second-lowest job growth, the highest number of business deaths and the lowest number of new business.

Cities with the most flexible work opportunities 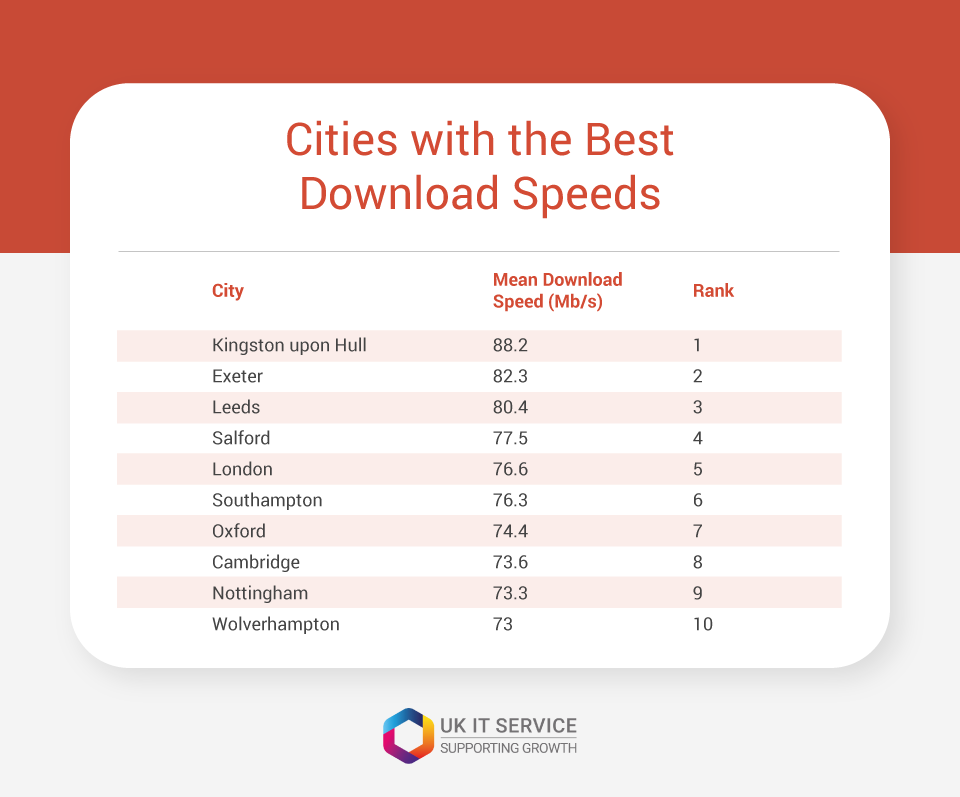 Using speed results from Think Broadband’s crowdsourced speed test data we’ve ranked each city by its download speeds. In first, we see Kingston upon Hull, Exeter in second and Leeds in third.

The most attractive London borough for employment

You often find London being compared to cities across the UK but being home to over 8 million people, we wanted to explore how each borough compared in more detail. 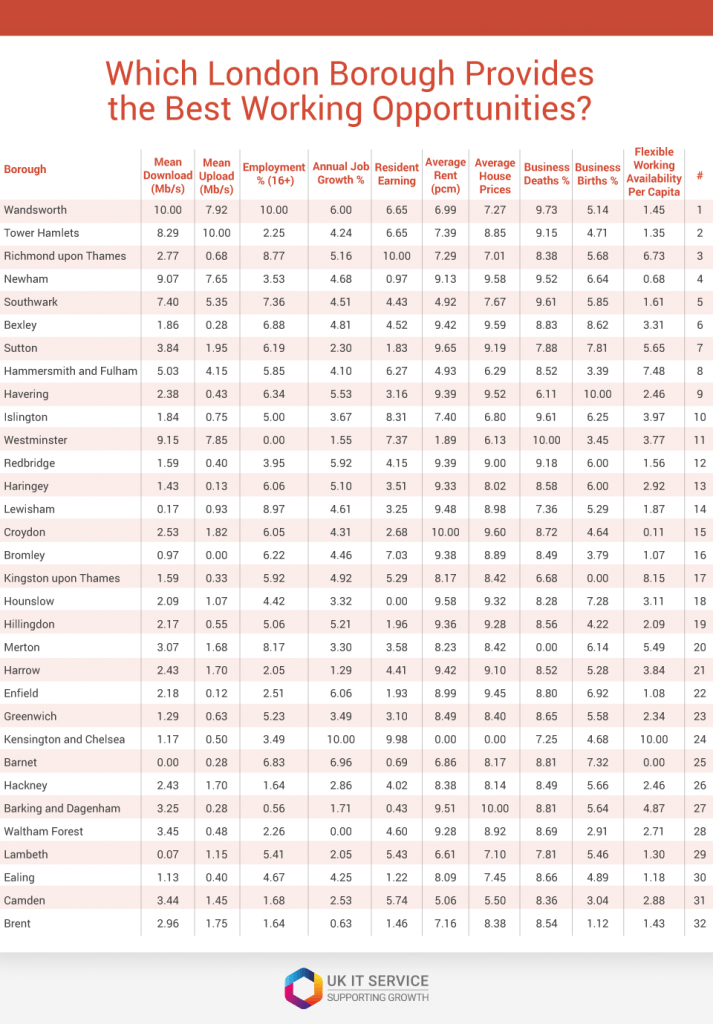 Tallying up all metrics to find the most attractive borough to live and work we found Wandsworth was first. Scoring well across all categories it was pushed to first by having the best download speeds, highest employment rates and second-lowest business deaths.

In second is Tower Hamlets, with the highest upload speeds, but low employment and job growth rates. In third is Richmond upon Thames which ranks highest for resident earnings, high employment rates, low business deaths, along with low rental and house prices. However, internet speeds are generally quite low.

On the other end of the spectrum is Brent, with low internet speeds, employment rates, job growth, and resident earnings, while rental and house prices were high.

London Boroughs with the most flexible work opportunities 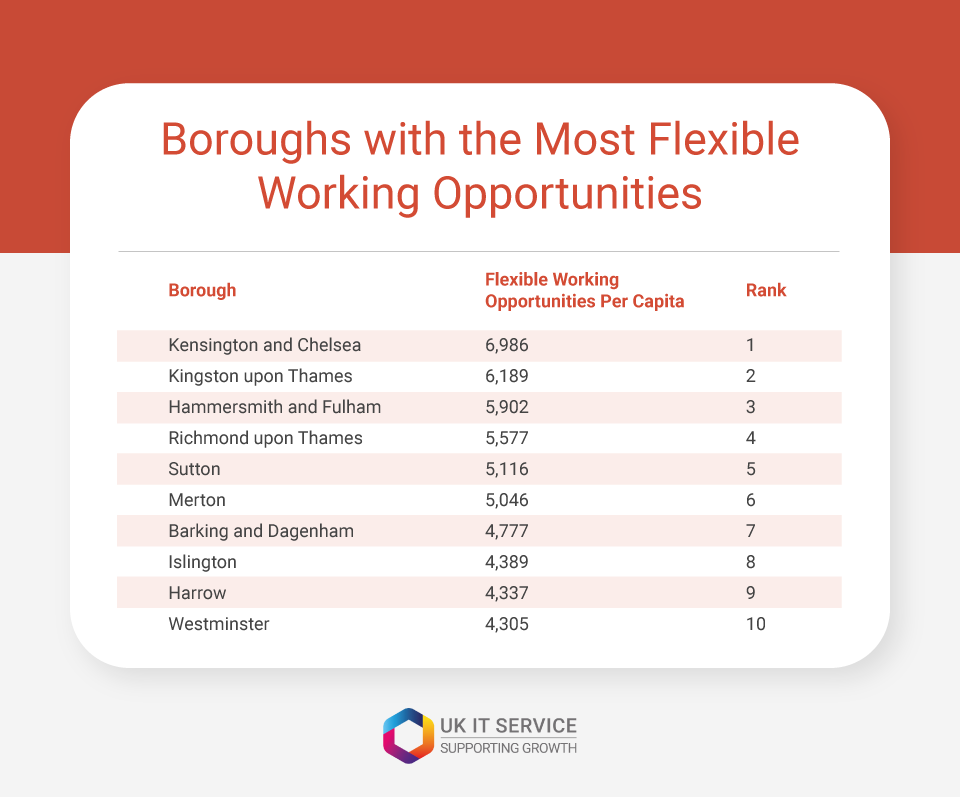 Exploring London by borough and calculating the data as a per capita figure to take into account population differences, Kensington and Chelsea ranks first with the most flexible job opportunities which can be explained by it also having the largest job growth in London. In second place is Kingston upon Thames and third is Hammersmith and Fulham. 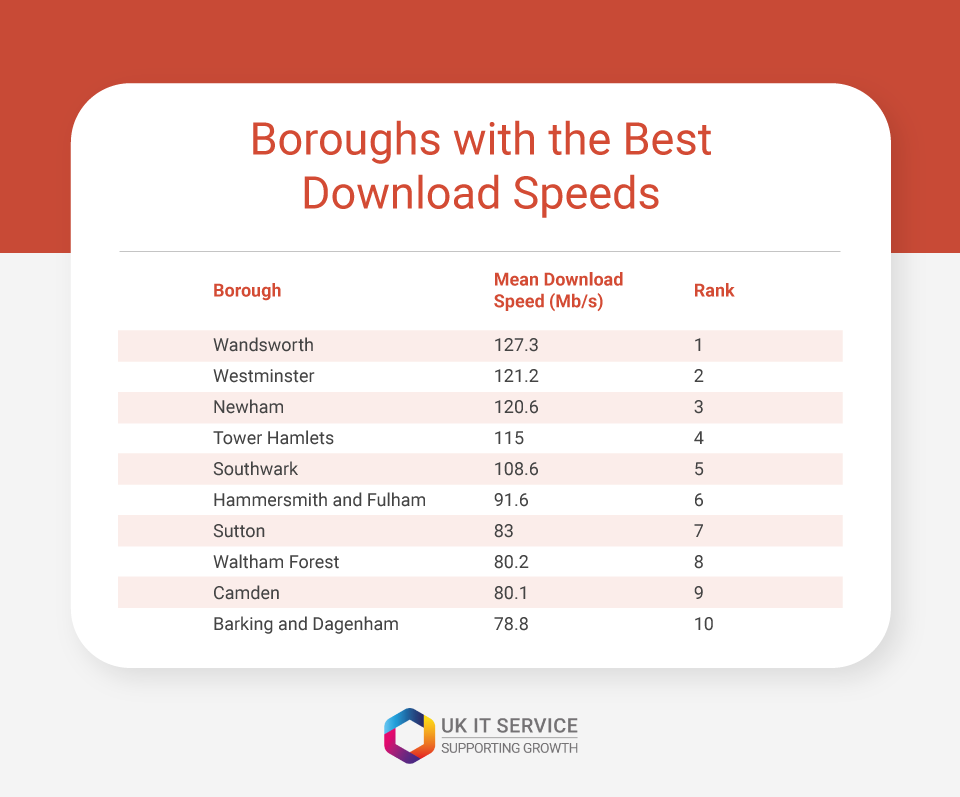 Exploring download speeds by borough, we find Wandsworth in first and has the largest percentage of employed 16-64-year-olds, Westminster in second which has the lowest percentage of employed 16-64-year-olds and lowest number of business deaths. In third is Newham with high scores across the board apart from resident earning and flexible working availability.

Each data point consists of the latest research available from reputable sources. The data was standardized using minmax normalization. The minmax normalization value is multiplied by 10 to create a score (between 0-10). A score of 10 is always the best result, while a score of 0 is the worst. Each city is then ranked on their overall average rating across all data points which includes both city-level, local authority-level and regional data points. You can find a link to the raw and normalised data here.

IT Support: In house vs Outsourcing and which is right choice for your business?

COVID-19: Remote Working for London Businesses - A Guide to Work from Home [Part-1]

We help businesses in London achieve growth by taking the hassle out of their IT and proactively managing their technology.
Looking for IT costs/prices?
Get a Quote Today
Not sure which service is for you?
Book a Call Now
CONTACT INFO
Address:
7 Stean Street, London, E8 4ED